Bring your consistently developing, an upgradeable deck of cards into a fight with you, conveying them on the front line, supporting your Hero, and eventually bringing down your adversary, procuring magnificence and sweet rewards.

Climb the positions, get marvelous plunder, and significantly more in War Alliance!

– CONTROL YOUR HERO, moving it around the front line and assaulting your rival’s powers

– SELECT A HERO that accommodates your play style, each offering remarkable details, and capacities

– UNLOCK NEW CARDS to bring into the fight

– UPGRADE YOUR BATTLE DECK to accommodate your triumphant methodology

– Prove your guts in battle and CLIMB THE LEADERBOARD

– Adjust your strategies for every one of 6 DIFFERENT ARENAS 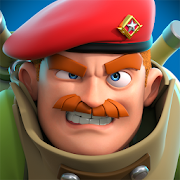